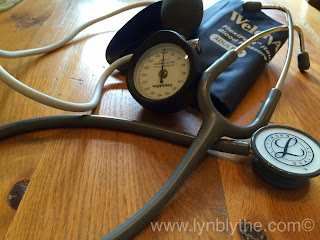 What is hypertension?
Hypertension is a long-term elevation of the blood pressure (BP) in the arteries. Two readings are taken when the blood pressure is measured with a sphygmomanometer. The first when the heart is beating (the systolic pressure) and the second, lower, reading when the heart is relaxing between beats (diastolic pressure). A "textbook normal" resting BP reading would be 120/80 mmHg, although this varies with such factors as level of activity, anxiety, exercise, etc.

Dangers of hypertension
Ongoing raised BP significantly increases the risk of having a heart attack, developing heart disease and/or having a stroke. It can also lead to kidney damage, narrowing of other blood vessels, potentially leading to such problems as skin ulcers, impotence, amputation or aneurysm (where damaged blood vessels eventually tear). The list of possible health problems due to raised BP goes on and on as all blood vessels are affected.

High BP tends to remain asymptomatic and is usually found during routine examination. Occasionally it may cause headache or vision problems. Eventually symptoms emerge as the blood vessels become damaged, for example, skin ulcers.

There is also a much rarer form of hypertension, malignant hypertension, where the BP is severely elevated, causing headache, kidney failure, fits and coma. This though is a medical emergency, not the usual ongoing, chronic, raised BP seen more commonly.

Causes of hypertension
Hypertension is divided into two types:

Essential hypertension - accounts for approximately 95% of cases, and merely means the cause is unknown!

Secondary hypertension - accounts for the other approximately 5% of cases, and means the raised BP is secondary to a known cause (see below):

Variations in BP
There are normal variations in everyone's BP. Not only does normal BP alter from minute to minute, but it also shows variation throughout every 24 hour period, with the lowest readings occurring during the night. However, in normal circumstances, these fluctuations occur within a relatively narrow range, and are carefully controlled.

More recently it has become recognised that larger, abnormal, variations in BP and also the maximum BP reached, are strong predictors of stroke and other vascular events, not just the average BP as previously thought.

Herbs
A vast number of herbs have a long tradition of use to address hypertension.

Herbalists rarely use herbs singly though. Instead, the herbs most suitable for each patient are selected and combined with additional herbs based on the rest of the medical history (including any medications) and the possible underlying causes of the circulatory problems, mindful of the fact that not all herbs are suitable for all people. This results in a prescription which is most appropriate and more effective for each individual. It is often the case that what not to include is as important as what to include in a prescription!

Hawthorn (Crataegus spp)
Hawthorn, a member of the rose family, has been used safely for heart and circulatory problems for many generations.The flowering tops (ie. flowers plus new leaves) are picked in the Spring, and the berries in the Autumn.

Cramp bark (Viburnum opulus)
Cramp bark has been used for many years to relax "muscle tension", making it a useful herb for a variety of complaints. Such "antispasmodic" herbs are commonly included in prescriptions for people with hypertension.

Lime (linden) flower (Tilia spp)
Lime flower is another herb commonly included in hypertension prescriptions. It also has an antispasmodic effect. In addition it is believed to make a useful contribution towards helping atherosclerosis (hardening of the arteries), when used in conjunction with other herbs and some dietary modifications. It is pleasant as a tea. Indeed the tea has a long-standing reputation as a calming drink to aid sleep.

Olive leaf (Olea europaea)
Most people are now familiar with the benefits of good quality olive oil to health, including its positive effects on the cardiovascular system. However, the leaves have also been used as a medicine throughout history. Again, antispasmodic, but they are also thought to have numerous other beneficial effects, such as helping normalise fluctuating blood sugar levels (NB. Not to be used as an alternative to insulin treatment in diabetics though!).

There are many other herbs which may be selected and included, depending on the individual concerned. Others include herbs such as bilberry, motherwort, yarrow, periwinkle. Frequently, herbs to protect the kidneys will be included, as ongoing hypertension can be damaging to these vital organs.