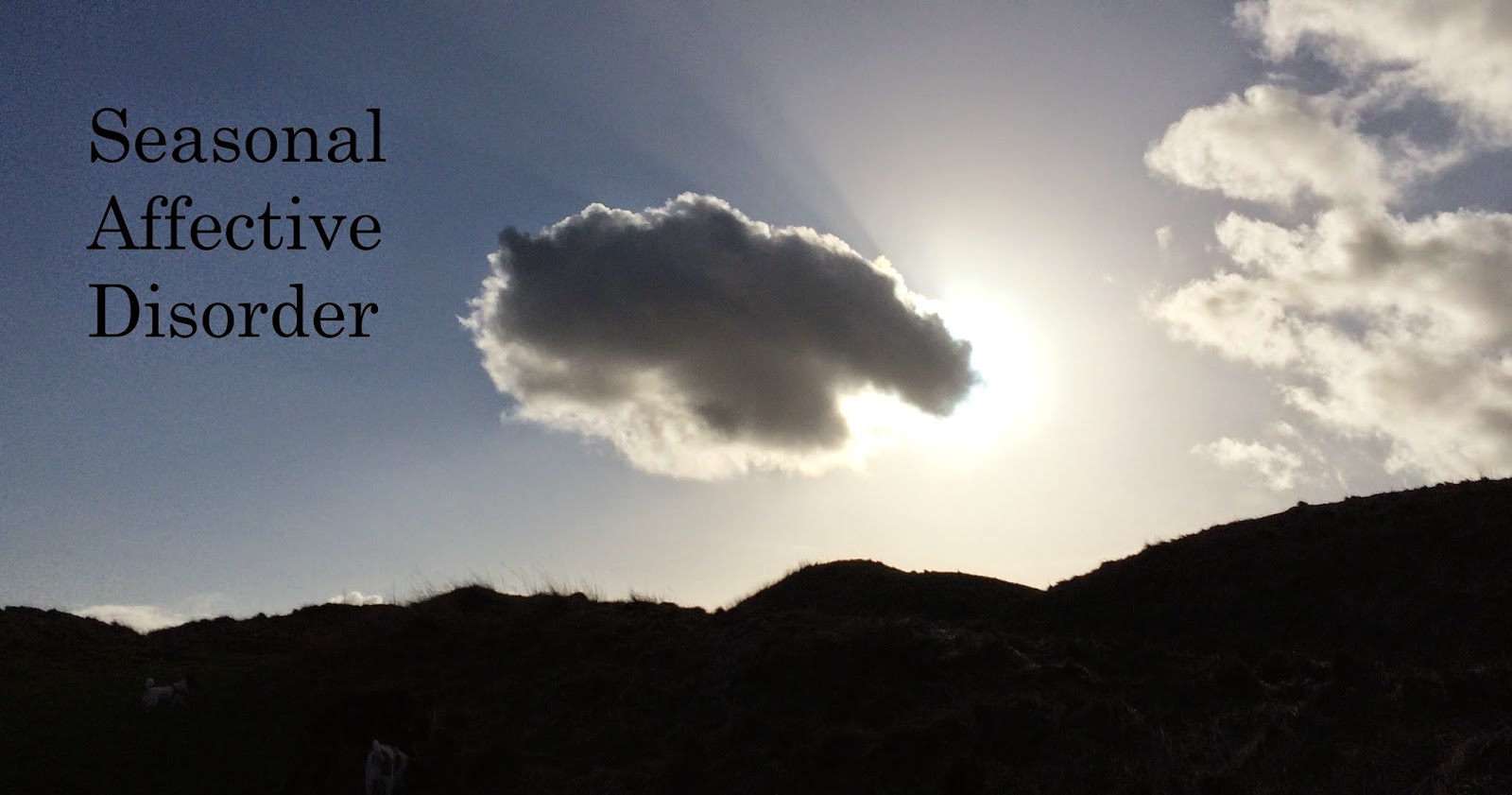 What is it?
Seasonal Affective Disorder (SAD) has been described as “a recurrent disorder involving seasonal episodes of depression, usually in the winter months”. Occasionally though, the depression may be felt in the summer.

This is not a new problem. It has been written that even in 200 AD a link between sunlight and depression had been recognised, and it was recommended that "lethargics are to be laid in the light and exposed to the rays of the sun"!

Most of us are affected to some extent by changes in season, for example, feeling brighter and more energetic on a sunny day. However, for people with SAD, these changes in mood as the seasons change are far more pronounced, and consequently have a significant impact on quality of life during these times. Indeed, some people with SAD report feeling unable to get out of bed in the morning when their mood is at its lowest ebb.

Who does it affect?
SAD is thought to affect approximately 2% of adults, and to affect women twice as commonly as men. SAD is more common in countries where there are significant changes to number of daylight hours, temperature and weather conditions between seasons.

Symptoms
Some or all of these may be experienced:

Symptoms usually begin in the autumn months as daylight reduces, and start to improve in the spring. December to February tends to be when symptoms are at their most severe.

Children
SAD is rare in childhood. However, when children are affected, it may present as irritability and sluggishness.

What Causes SAD?
The exact cause(s) are unclear. Women in their reproductive years are most at risk, as is the case for all forms of depression, suggesting a hormonal link. Obviously, reduced daylight is another causal factor. It is thought that this relative lack of sunlight affects levels of the brain chemicals serotonin and melatonin.

Serotonin
Serotonin, also known as 5-hydroxytryptamine, is a monoamine vasoconstrictor, derived from the amino acid, tryptophan from protein. It is found in high concentrations in many body tissues, including the wall of the intestine, pineal body, in the blood, and the central nervous system. It is involved in mediating numerous functions, such as reducing stomach acid secretion and serving as a neurotransmitter (messenger in the nervous system).

People with SAD have been found to have reduced serotonin levels, especially in the winter. Given the number of widespread roles of serotonin in the body, it is easy to see how low levels would potentially result in many symptoms.

Melatonin
Melatonin is a hormone produced from serotonin in the pineal gland in the brain. Melatonin secretion is high at night (which makes us sleep) and low during the day (hence, we wake). It is involved in the regulation of sleep, mood, puberty and ovarian cycles. Indeed, the pineal gland plays a major role in establishing circadian rhythms ("body clock"). Bright light inhibits melatonin secretion, hence it is often recommended that people with insomnia should not use computers or be in other brightly lit situations immediately before bed.

Disrupted circadian rhythm ("body clock")
The body normally regulates functions such as digestion, sleep and energy levels throughout each 24 hour period. However, reduced sunlight can disrupt this regulation, leading to SAD symptoms such as depression.

Other possible causes or triggers of SAD
Other triggers which have been suggested include:


Self-help
General self-help strategies:
NB. Spending time in a sunny location (eg. a holiday) whilst affected by SAD may reduce symptoms temporarily, but then lead to an exacerbation on returning home, since SAD is usually a reaction to changes in season.

Light Therapy
Light boxes are growing in popularity as a therapy to reduce symptoms of SAD (see links below). They emit bright light, but without the harmful Ultra Violet Radiation (UVR). Light boxes are available in different strengths and sizes. They are generally more effective when used in the early morning, and for approximately half to two hours, but the most effective use varies between people, with the brightness of the day and with the box used. It is advisable to not use them before bed though, as this may cause insomnia (see melatonin above).

Dawn-stimulating alarm clocks, although less bright than light boxes, can be used to gradually increase light in the hour before waking. This can be especially useful if someone finds it difficult to wake up in the morning when affected by SAD.

Occasionally, light therapy may cause headaches or blurred vision.

TANNING SALONS ARE NOT A TREATMENT FOR SAD!
....even though it is sometimes said that they are!

Talking therapies
Talking therapies can be a useful adjunct. Cognitive Behaviour Therapy (CBT), which aims to change mood by altering thought patterns, may help. Counselling and psychotherapy are worth considering.

NHS therapists (see your GP to be referred) often have long waiting lists. If considering consulting a therapist privately, it is important to look for one who is properly qualified and registered. The British Association for Counselling and Psychotherapy (BACP) has a list of such accredited practitioners in each area (see links below).

NB. Herbalists use whole plant extracts of St John's Wort, rather than extracts which contain isolated constituents from the plant, as tends to be the case in over-the-counter preparations. This is because whole plant extracts are believed to be safer, having been used safely in this way for many generations. In contrast, the use of isolated constituents is relatively new, and has been associated with side-effects.


St John's Wort has many useful actions. However, its effect on improving mood is believed to be partly achieved by blocking the re-uptake of dopamine, serotonin, noradrenaline and Gamma AminoButyric Acid (GABA).

*St John's Wort can be used in conjunction with light boxes, as the function of these boxes is to act via the eyes (not the skin) and they emit visible light, not UVR, as reported by the Skin Cancer Foundation (see above, and also the relevant link below). It is usually advised to use a light box with a UVR filter in order to ensure this is the case.

St John's Wort may not be suitable for everyone. If in doubt, check!

Lemon Balm (Melissa officinalis)
Lemon balm has a long history of use as a herb to help banish "the blues". Indeed, the 17th Century herbalist, John Evelyn wrote "balm is sovereign for the brain, strengthening the memory, and powerfully chasing away melancholy". Lemon balm has numerous other applications, for example, it is also taken by people to help alleviate anxiety and/or digestive problems. Studies are emerging which appear to back up these traditional uses. Furthermore, there is mounting evidence for the use of lemon balm to address Alzheimer's disease.

Rosemary (Rosmarinus officinalis)
Many old herbal texts describe rosemary as a "thymoleptic", ie. to improve low mood. The old saying "rosemary is for remembrance" refers to the age-old use of rosemary for increasing blood flow to the brain, so potentially improving memory. Rosemary has numerous other uses, as is often the case with herbs. These uses are increasingly supported by modern research.

Lavender (Lavandula angustifolia)
Lavender is another plant with a long history of traditional use for easing low mood, anxiety, insomnia and for improving memory. It also has uses in the gastrointestinal tract. Its use as a medicine is not new, having been popular since the late Middle Ages. The herbalist John Parkinson (1640) described lavender as being of "good use for all griefs and pains of the head and brain". It probably goes without saying that this is a wonderfully aromatic plant, rich in volatile oils, which studies show have antioxidant and anti-inflammatory actions.


References, useful links and further reading
British Association for Counselling and Psychotherapy (BACP) www.bacp.co.uk
For a list of accredited practitioners in your area, for talking therapies.

Lumie www.lumie.com
For information on light boxes (as recommended by MIND)

Skin Cancer Foundation
For information on how tanning salons are NOT a treatment for SAD!
http://www.skincancer.org/prevention/tanning/seasonal-affective-disorder
[Accessed15th January, 2015]
Posted by Swindon Herbalist at 03:36